No matter what side of the fence you are on socially or politically regarding immigration, if you’re a business owner with employees, expect changes of the regulatory sort.  What changes?  First, expect an even larger increase in the number of I-9 audits as well as an increased legislative effort to change requirements for very small employers (normally exempt from eVerify requirements) to use the eVerify system.

We’ve been watching this train come down the track for a couple decades and have reason to believe that I-9 audits will become even more so, as it under President Obama, a major emphasis of the Trump administration within its immigration policy.

Let’s look at a few facts.

The current administration has been lambasted by John Q Public for what are seen as excessive crackdowns on illegals.  In 2009, ICE made almost 298,000 administrative arrests.  Around that time, Obama administration was on the receiving end of public backlash for being too forceful with immigration; yet the administration still had to fulfill a campaign promise to deal with illegal immigration.  President Obama was clear at that time that cracking down on illegals could best be done through targeting employers.  So, from 2012 through 2015, the number of administrative arrests began decreasing at the same time that the number of I-9 audits dramatically increased from 500 in 2008 to over 3,000 in 2013.  Most experts would agree that, in today’s political scenario (yes, under the Trump administration) an increase in I-9 audits is almost a given. 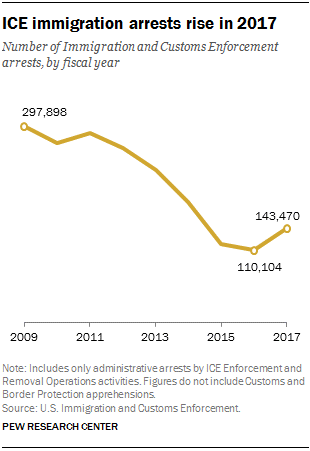 Click the graph above to link to the original article.

Currently only some U.S. employers are required to use the eVerify system to confirm the eligibility of their employees to work in the U.S.  While there’ve been attempts for years to require eVerify for all employers (the current bill before Congress is S.B. 179) the difference today is the intense pressure in social media to require eVerify for all employers as an alternative way to prevent the hiring of undocumented workers. What’s wrong with this thinking?  The most obvious is that this law as written would apply across the board to all employers regardless of size, with a penalty of $1,000 to $25,000 for violating it.  The real question as you read about this in media is: Does extending this requirement to all employers really prevent hiring undocumented workers, and is it worth the increased burden on small employers, such as small farmers, small consignment shops, small residential plumbers, etc.?

Response to I-9 and eVerify